I had to go to the city center this afternoon, to mail some urgent package at the central post office, as I missed the 1 o'clock-ish Saturday deadline of the private courier in my neighborhood. I'm usually lazy on Saturday mornings as it's my... sleeping day(!), plus their website said they were open till 3:00pm but once I got there I found out it was actually 1:00 ~ 2:00pm for receipt of packages (whenever the girl at the reception desk leaves...).
I called the Postal Service courier service number and was told that the central post office was open till 6:00pm. So, happily surprised that at least one public service is better than its private competitors, I decided to hop on a bus and head to the center, and at the same time take some photographs that I've spotted this past week.

You can imagine how frustrated I was when, upon getting there I discovered that both central post offices were closed. The one at Patission St., near Omonia Sq. was flat out closed while the one at Syntagma Sq. was also shut but had a miserly, printed paper posted outside, informing people (in Greek and English!) that their closing time on Saturdays is actually 2:00pm!

The weather was fluctuating from mostly greyish to occasionally fair and blue, perfectly matching the city center's and country's gloomy state of these days interrupted by sporadic dashes of hope every time another tranche of the bailout money is released. The picture below is from Tositsa St., the pedestrian street right next to the National Archaeological Museum, where scores of junkies hang out, bargaining for their fix, except when they're temporarily driven out for some special event... It seems like they were the only ones to keep their schedule (which is almost 24/7).﻿ [P.S.:  I just read that there are various events planned throughout this week (from 1 Oct. to 7 Oct.) at Tositsa St., but I could see no difference when I passed by yesterday afternoon. / P.S.2 (Feb. 2012): Things seems to have changed, as drug addicts have been pushed away from this street ].

﻿The picture below is from Omonia Square a few blocks away from the Archaeological Museum. I was surprised to see this the other day, and thought it was some kind of quirky or provocative art installation about the state of the Square and the lack of green spaces in Athens / Greece (these are cement sacks).

As I got close I realized something unusual. On one hand, I felt safe walking on the square, as the drug addicts I was expecting to see were not there, on the other hand I noticed a group of people with military, khaki clothes sitting at the center, which till now was taken over either by drug addicts or/and some of the -mostly illegal- immigrants that live near this area. It then dawned on me that these were probably some extreme-right wingers that had taken over (or "taken back") the square, in a symbolic act and this "art installation" was theirs: an army "bunker" with Greek flags around it!
I've heard it said that people often resort to art in times of crisis and this is probably the ultimate attestation to this truth. A far right art installation! What's next?
[I'm not trying to make light of the fact that immigrants have been injured and/or killed in attacks in recent years, some of them attributed to racist motives, nor of the rise of criminality in Athens, partly attributed to immigrants]

Further down, at 20 Pireos St., a giant mural adorns the side-wall of Vienna Hotel. The mural was commissioned by the Ministry of Environment and the Athens School of Fine Arts as part of an effort to beautify central Athens and was revealed a few days ago (Artist: Pavlos Tsakonas, Execution: Kretsis Bros. and Manolis Anastasakos).


Titled "praying for us" with the giant hands upside-down, as if God is praying for people, it perfectly captures the mood of these days (but also many Greeks' fatalist mentality). It's no wonder that both of Athens' major free presses ("Athens Voice" and "Lifo") had it as a cover this week! 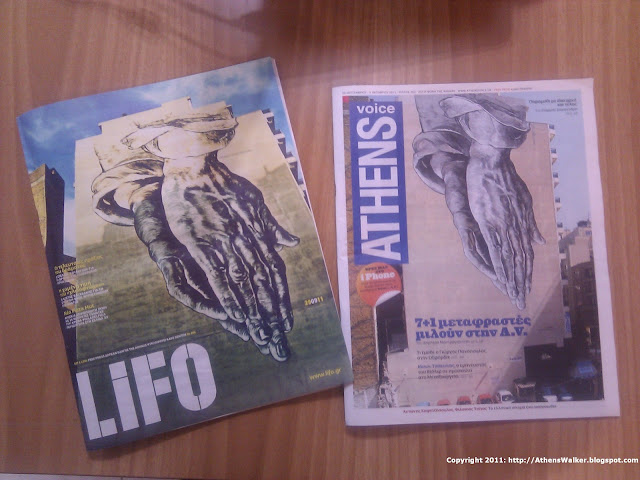