The "Basil & Marina Theocharakis Foundation for the Fine Arts & Music" (in short: Theocharakis Foundation) is located right across the street from the Greek Parliament and the National Garden in a 1920's listed, 5-floor building, renovated in 2005. It is currently hosting an exhibition on Greek Nobel Prize Laureate Odysseus Elytis (1911-1996) and his relation to the fine arts.

Elytis, received the 1979 Nobel Prize in Literature, "for his poetry, which, against the background of Greek tradition, depicts with sensuous strength and intellectual clear-sightedness modern man's struggle for freedom and creativeness", ...in the words of the Nobel Committee for Literature. 2011 marks a hundred years from his birth, thus the occasion for this exhibition, which portrays, for the first time, Elytis'  relation with the fine arts. The first part of the exhibition showcases paintings and collages by the poet himself, which, as I found out seemed to be influenced by the same themes as his writing: Greek history, religion, nature, the Aegean sea... I really liked his paintings, especially the use of color and simplicity, but I'm kind of "prejudiced" against collages in general. They remind me of Grammar or Junior High school "art classes" and, on top, I find something inherently kitschy into collage as an art form (sorry if I offend you; you can safely reject me as an ignoramus). So, collages of angel wings and Greek orthodox churches and white-washed houses and beaches didn't  cut it for me...
The second part of the exhibit features paintings (mostly) and sculptures of artists whom Elytis admired and had either forged personal relations with or had written critiques on their work. He had spent some time in Paris  in the 1940's and 1950's and got to know Picasso, Matisse and most of the Greek artists "diaspora" in Paris. Unfortunately his texts / critiques are only in Greek.
The third part consists of works (from paintings to installations) that modern artists created and which are influenced, in one way or another, by Elytis poems. One of them belonged to Basil Theocharakis, a Greek businessman and painter who is the founder of this museum along with his wife. 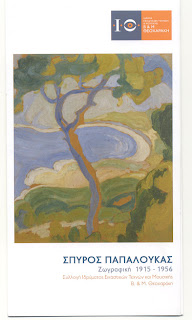 On top, I got to see the museum's permanent exhibit of paintings by Spyros Papaloukas  (Theocharakis studied painting under Papaloukas) which is housed on the 5th floor and only opens certain days and hours (Tue, Thu: 1:00pm - 5:00pm), at request. The Papaloukas paintings are hung in what seems to be an office room so, unlike the rest of the museum, they are not ideally showcased for visitors but you can get a glimpse of them from up close nonetheless. Overall, the museum hosts some very interesting exhibits and it's worth checking out when you come to Athens. Music performances are also hosted in the underground auditorium from time to time. 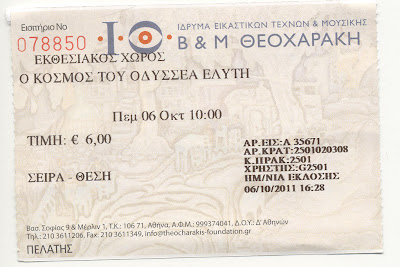