I just recently visited the retrospective exhibit on 20th century Greek painter Agenor Asteriadis (1898-1977) at the Benaki Museum, at 138 Pireos St. I had come across some of his paintings at a Theocharakis Foundation exhibit ("Masterpieces of Greek Painting") a few months ago and loved his cartoonist, map-like cityscape of the town of Larissa, as well as his vivid paintings on the earthquake that had shaken his native town in 1954.  Asteriadis, though mostly known as a landscape painter using water colours, also embraced and experimented with a number of various means, including oil and egg-tempera and worked on engravings and religious paintings. The influence of religious / byzantine painting on his style is at times obvious, although he incorporated it in his non-religious themed works in a creative, natural way. I was surprised to read, and to then recollect, that some of his works had been used as pictures in Greek school books, esp. grammar school. An interesting piece of information I read was that he had finished at the bottom of his class at the Athens School of Fine Arts...
The exibit runs till 20 November 2011. 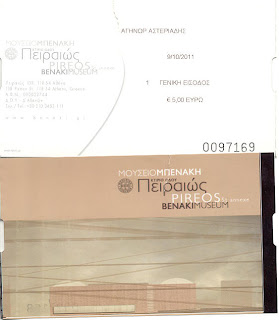 If you can't make it to the Benaki Museum you can see a thorough web presentation of Asteriadis's works at this, Greek-only, but very well designed web gallery.