In case you don't know, the word Acropolis (or 'Akropolis') is a compound of 2 other Greek words: akro (meaning peak or edge) and polis (meaning town). So, the 'Akropolis', in ancient Greek cities was the area located at the... (vertical) edge of a city, at the top of a hill. Such location usually served as the city's stronghold, being difficult for invaders to occupy. Most ancient Greek cities had an Acropolis, but the most famous one is the Acropolis of Athens, with the Parthenon and the other ancient monuments on top. So, the word 'Acropolis' has almost become synonymous with the 'Acropolis of Athens'.
Yet, modern metro Athens, sprawling over an area many times that of the ancient city, encompasses several more hills. The view below is from a grouping of hills called Tourkovounia (meaning Turkish mountains) and especially from the Panorama Galatsiou vantage point.
The hills got their name from the fact that Turkish troops used to be stationed there for 1.5 year during the battle for the occupation of Athens in 1456-1458 and it has stuck ever since. I've also read that these hills had remained a Turkish military camp up until the liberation of Athens in the 1820's. 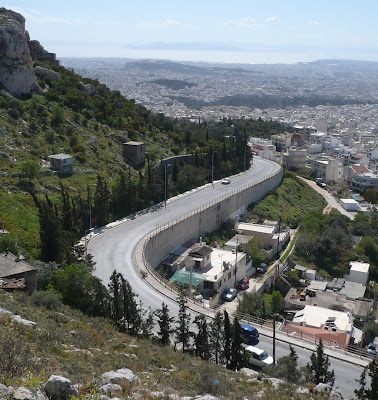 The curved road seen in the picture serves as a sort of lovers' lane at nights, with couples or groups of friends parking their cars on the narrow pavement, watching the city lights.
The first hill, right below the Tourkovounia, is called Lofos Patatsou, the large one in the middle is the Pedio Areos / Parko Dikastirion (the largest city-center park in Athens - a good part of which is currently under re-construction), the third one is Lofos Strefi (Strefi Hill) which does not have much going for it other than the nice view and a city-center location, and finally, behind all these is the hill of the Acropolis, with the Parthenon on top.
In the background you can see the Saronikos Gulf and the island of Aegina. 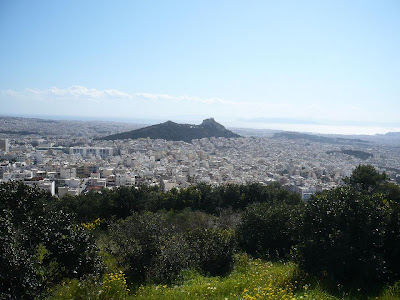 The picture above was also taken from the Tourkovounia. You can see Lykavittos (aka Lycabettus) Hill in the middle and the Acropolis to its right. Tourkovounia themselves have also recently been landscaped and a brand new park (named Attiko Alsos) sits on top of the hill, together with a playground and some tennis / basketball courts (you can see a few pictures of the Attiko Alsos here)

To get to Attiko Alsos / Tourkovounia you have several options, but all of them involve a bit of walking:
-Catch Bus 036 from either Katehaki Metro Station or Panormou Metro Station. The bus goes around the Tourkovounia. Get off at Evrou bus stop and walk up the hill (Attiko Alsos) on your left hand side. You should see the signs pointing to Attiko Alsos and the open-air, summer cinema located in it.
-You can also catch Bus 622 from in front of the Archaeological Museum, at Patission Street, and get off at the end of the line (at Protopapadaki St., IKA bus stop). You will have to walk up the hill to your right (be careful of the heavy car traffic!) and then turn left to reach the Attiko Alsos entrance.