We have been planning this for quite some time and finally we can both spend a staycation in Athens. (I just found out there's even a book about... staycations, listed here in Amazon

.) I suppose our schedule (not that we have a very strict schedule but we'll try to fit in as many things as possible) will give you an idea about the types of attractions one may find in Athens these days. So, on...

Saturday, 2010-04-17
we first went to the Public superstore in the center of Athens, at Syntagma Square, to a book-signing by Greek writer Antonis Sourounis (short bio in German). The whole thing was a bit of a let-off, not because of the writer -I sensed that he himself was also a bit taken aback- but because of the way the thing was organized. It was just a book-signing. No talk, no discussion, nothing else. (The only work by Sourounis translated in English that I've managed to find is a story included in the volume The Livelong Day: Working in the World (Icarus World Issues Series)

, although several of his novels have been translated into German and French).
But Public has a very nice atrium-cafeteria at the 5th floor, with a view towards Syntagma Square, and it even seemed to be smoke-free! So we spent an hour there lazying around. 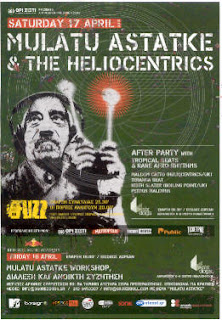 Later in the evening, we attended a concert, at FuzzClub, by Ethio-jazz master Mulatu Astatke

& the Heliocentrics, a British group that accompanies him in his touring. I had also been to Astatke's last concert in Athens last summer, at Synch Festival, so going for a second time in less than a year was a big gamble, but I was happy for it in the end because they were all a great band of musicians and it was a pleasure to watch them live again. Thankfuly, the air-conditioning system at Fuzz seemed to work quite well (not always the case) so smoking was not a problem. If only the guys behind the bar did not have the horrible habit of breaking glass bottles during the concert...! What a piercing noise that was! Oh, and I can't get over the fact that some people (is it just Greeks?) seem to be going to concerts with no care for the music whatsoever. They keep talking, cheering, yelling, as if the whole thing is about themselves feeling happy or just being cool, and not about the music itself. If people would just listen to the music!

Sunday, 2010-04-18
Early morning wake-up for a visit to the Presidential Mansion's garden. This is something new, as the Presidential Mansion had never been open for the general public until now. A nice initiative from the acting President of the Republic. The Mansion is located at Irodou Attikou St., facing the National Garden, but the entrance for the Mansion's garden is from the Vasileos Georgiou Defterou St. (bottom right in the Google map below) 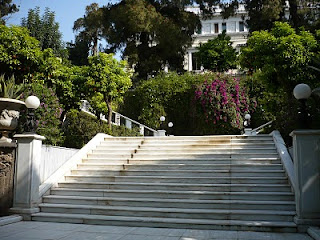 Unfortunately, people on wheelchairs cannot access the garden as you have to climb up and down some fairly large marble stairs to get to it. 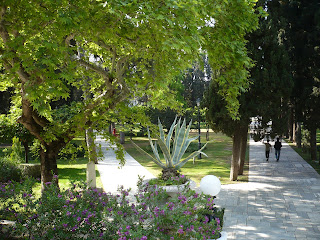 It's a formal style garden, that is of a fairly strict, geometric design. 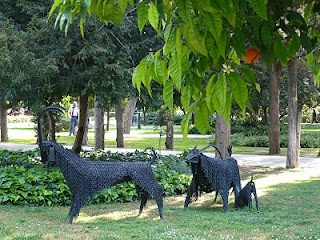 Sculptures of various styles and periods dot the lawn. Every year, on July 24, the President gives a reception in the Mansion's garden as this is the day that Greeks celebrate the restoration of democracy, after the 1967-1974 junta.

The garden opens for the general public from 10:00 am to 2:00pm on Sundays (unless it's an official holiday) and you need to have a passport to get in. There is a small queue but you don't need more than 30 minutes to walk around and get a good feel of the garden. 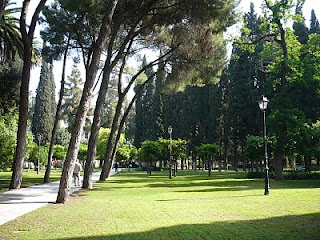 You could easily combine this with a walk in the, much larger, next-door National Garden and then have a coffee at the "Aigli" café - restaurant next to Zappeion Megaro (Zappeion Mansion). "Aigli" has top quality coffees, shakes and pastries (on the expensive side) but the service was rather mediocre on this busy Sunday morning.

In the evening, we went to see a play (which was actually 2 monologues), starring 70-year old, long-time actor and theatrical director Takis Vouteris. The plays were written by Yorgos Maniotis and Iakovos Kambanelis or Kabanellis

. I bet you didn't know that Athens has a real fascination with theater (or theatre :) ) and more than 400 plays went up on Athens' stages last year. There are more than 110 theatrical venues and some small productions come up in alternate venues like cafés or bars.

(Continue here for part 2 of our 2010 Athens staycation)