More pigs... This time at the National Archaeological Museum of Athens

People who haven't caught the pig collection virus may think that this is a bit too much. First I write about pigs at the Acropolis Museum and now it’s pigs at the National Archaeological Museum? I could present this as another child-friendly post, bridging games and archaeology, but the truth is that the is too big to go pig hunting in its halls! Make no mistake, us pig collectors may be a bit shy sharing our addiction with others (sympathetic ears are hard to find) but no matter how hard we try it always finds a way to creep in, even in the most unusual of circumstances. As there’s a big number of pig collectors in this world (more than you would guess…) and some of them will certainly come to for vacation at some point this is not entirely self-centered. So, enjoy my discoveries of ancient, wild, pigs depicted in artifacts found in the in  of the ancient treasures found there.

Ground Floor, Room 4 (third section)
The Tiryns Wall Paintings: The Akrotiri wall-paintings from the island of Santorini (found on the upper floor) may be more famous, but in the central hall (Room 4) of the ground floor, you will find two wall-paintings (at your right hand side) depicting a wild boar hunt, as the boar is being attacked by hunting dogs. The dogs look a bit pig-faced too if you ask me, but this may just be me. 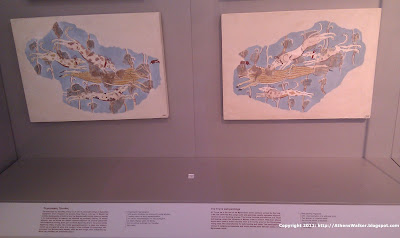 Ground Floor, Room No. 5 (far end)
Further on at the ground floor (left hand side) you will find a Bronze Age (3rd century BC) piggy-bank shaped vase from Poliochni in the (No.22 in its window). 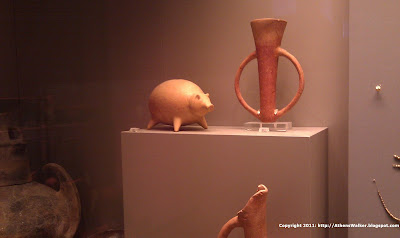 Ground Floor, Room No. 10 (far end)
You will see a votive relief(*) depicting Heracles (aka Hercules) capturing and carrying the Erymanthian boar (one of the “twelve labours of Hercules” in ancient Greek mythology) 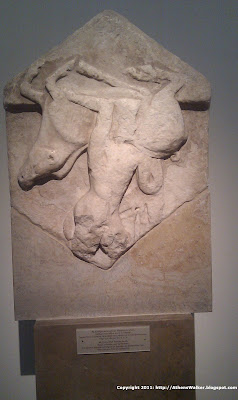 (*) [You will see the term votive offering many times in the museum: it means an object deposited in a sacred place to gain favor of supernatural forces]


Ground Floor, Room No. 28 (far left corner)
In this room, people gather around the bronze statue of a young man who is probably Paris holding the Golden Apple of Eris (Discord) but in the far left corner, behind the young man you will notice the remnant of a 4th century BC marble boar head, found in an ancient temple at Tegea, Arcadia, depicting the hunt for the Calydonian boar. I think I must have been the only one to ever take a picture of it! J And if the young man is indeed with the golden apple then you have a pig and an apple in the same room… (If you’re too serious about ancient art you’ll have to forgive me…) 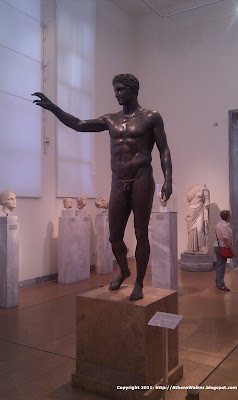 Ground Floor, Room No. 32
This same Calydonian boar is depicted in a very well preserved sarcophagus, from the 2nd century AD, together with the whole scene of its hunting. The marble sarcophagus was found near the city of in western . BTW, if you are into gory and morbid subjects the –much smaller– Archeological Museum of Patra has a whole section on ancient death rituals with sarcophagi, tombs and the like… 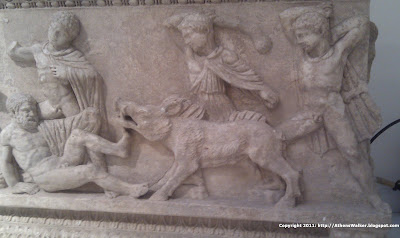 Ground Floor, Room No. 36 (Metallurgy / Karapanos collection)
Part of a collection donated by 19th-20th century Greek politician Konstantinos Karapanos is an amazing “pair of lead jumping weights in the shape of a boar” (Kar. 855a, 855b), found in the ancient , near the NW city of . 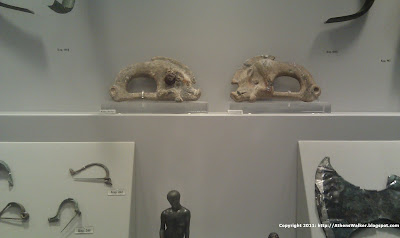 Upper Floor, Room No. 55 (or 54) (ceramics collection)
There’s a really interesting 5th century BC small vase (lekythos) here, among myriads of others: A depiction of a tale from Odyssey: “Odysseus’ (a.k.a. Ulysses’) companions turned into swine” by the witch Circe (a.k.a. Kirke). The vase is in black – red colours, “from ” and painted “in the manner of the Bowdoin Painter” 480-470BC. (9685). 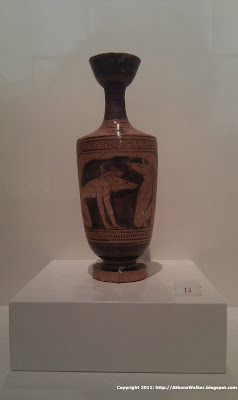 Of course, pigs (should I say boars?) are not the only animals or objects of interest to be depicted in ancient artifacts found in the National Archaeological Museum in Athens, but for the rest you’ll have to go searching on your own. If you think I’m not taking ancient art seriously, that would only show you don’t know much about pigs :) [Update: ...and as I just found out, ancient Greek pigs are the subject of study of a University of Buffalo professor. Read on: Hog Wild in Athens B.C.E.! Role of Pigs in Social and Religious Life Provides Insights into Ancient Greece] As always, your comments are more than welcome!