Visit to the Presidential Mansion's Garden

If you have programmed to stay in Athens for more than a couple of days, with the summer heat steadily above your comfort zone and archeological sites permanently exposed to the sun, you may start craving for the shade of a quiet, peaceful garden. The Greek "Presidential Garden" (Proedrikos Kipos) or, more precisely, the Garden of the Greek Presidential Mansion (Kipos Proedrikou Megarou) may be just the place you're looking for. It's not a typical tourist site, which is not a bad thing in itself but it's right in the center of Athens - next to the National Garden and very close to the Parliament and Syntagma Square. Even most Greeks haven't been here, as it was only opened to the public for the first time in 2010. I wrote about it in a previous post (Athens Staycation 2010), but that information was buried together with lots of other stuff so I'm writing a separate post to bring it to the front.

Where: The Mansion is located across the much bigger National Garden, at the corner of Irodou Attikou St., & Vasileos Georgiou Defterou St.. The entrance for the Presidential Garden is, unsurprisingly, from the side street (what would in past times be called the service entrance :) ), at Leoforos Vassileos Georgiou Defterou (King George 2nd Ave.).

When: The Garden is open only on Sundays (except for official holidays), from 10:00am to 2:00pm. You need to have a passport with you to enter the place but you do not need to call ahead (Update: information still valid on May 2013).

Who: Everyone, with a valid ID or passport may enter the garden. Unfortunately, that does not include people on wheelchairs, as there are several stairs, at several points, that you will need to go up and down to enter the Garden.

What: The Presidential Mansion's origins are kind of humble, as the lot it is built on used to serve as the Royal Cabbage Garden (!!!) back in the times of monarchy. In the 1890's it was decided to build a palace for the Heir to the Throne and this was the chosen lot. Construction started in 1891 and finished in 1897. Since 1909 it has served as the Royal Palace or Presidential Mansion, depending on the system of government existing each time. Today's Greeks associate images of the Presidential Garden with an annual party / ceremony given here by the acting President of the Republic on July 24, each summer. The date marks the occasion of the fall of the military junta on 24 July 1974, and the restoration of democracy.

Going past the first entrance, if you turn back and look up towards the building you'll notice two royal symbols engraved on the wall. They stand for King Konstantine and Queen Sophia, the acting royalties when the Mansion was built. 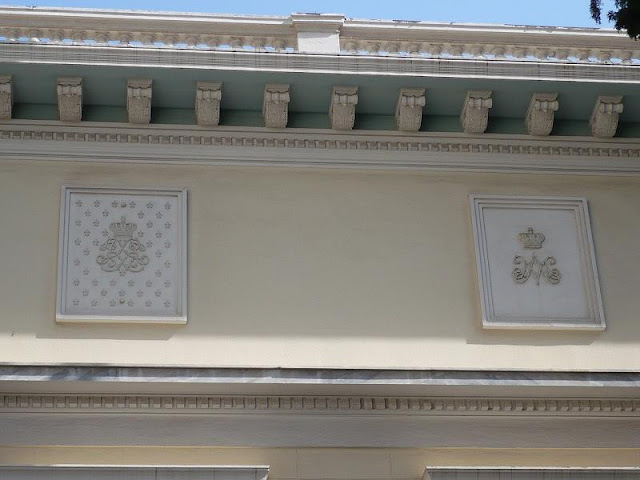 Moving on, you'll see a small orange grove to your left... 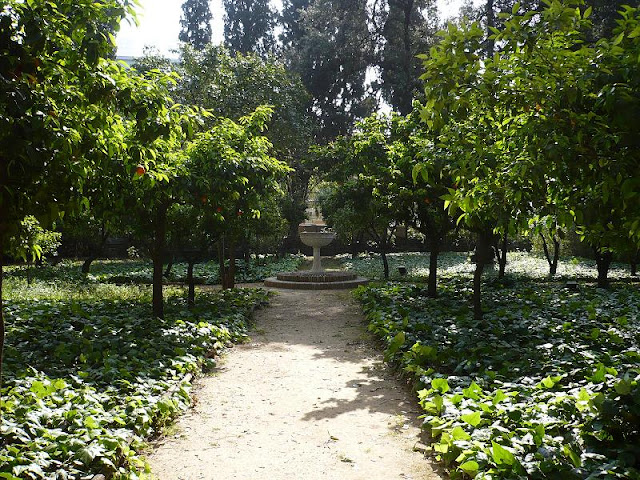 ...and then you'll walk up several stairs to get to the main part of the Garden. [By the way, visitors do not have access to the upper, front part of the Garden which is open on Irodou Attikou St.]
It is designed in a rather strict, formal manner, with elements from "French Garden" design but also incorporating more "naturalist" elements and plants native to Greek vegetation such as the super-tall, more than a century-old junipers that dominate the main axis. 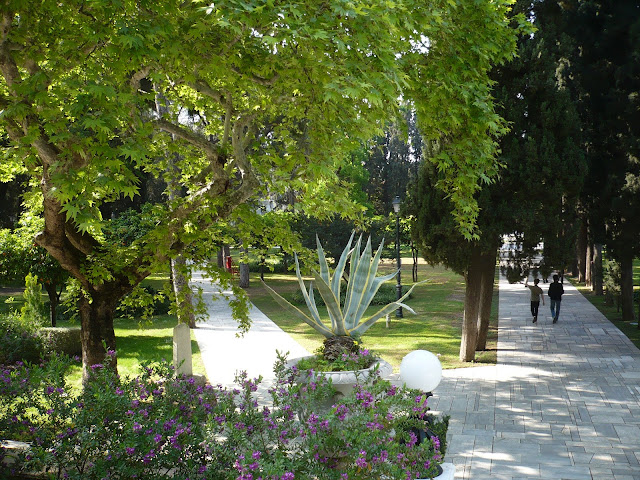 There are 140 different plant species present in the Garden. The most interesting feature is probably the sculptures, of various types and materials, that dot the lawns. I especially liked the "lighter" ones, such as this group of metallic rams sitting near the entrance. 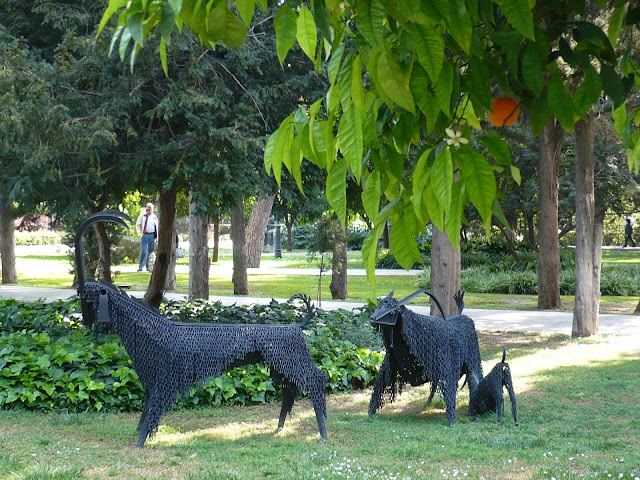 The garden is completely hidden from Irodou Attikou St., behind a tall fence and even taller trees, but on the back side you'll be surprised to see the balconies of nearby polykatikies (blocks of flats) peeking into the garden! There is also a small pool, a pavilion, a few benches and some pergolas, along with fairly large parts of lawns and terraces. But don't expect to be allowed to roll around on the grass or spread your towels on the lawn and sunbathe! This is still the residence of the President of Greece, although I'm sure the number of secret service agents and police watching your every step won't let you forget it!