The painting exhibition "Paris 1900: Art Nouveau and Modernism" (click the EN at the bottom for English text), hosted in the National Gallery of Greece-Alexandros Soutzos Museum, up to 28 February 2011, is in exchange for an exhibition that was sent from Greece to Paris a couple of years ago, with Byzantine relics and treasures from the Mount Athos (Aghion Oros - "Holy Mountain") monastic compound. The exhibits are Belle Epoque paintings sent from the Petit Palais Museum in Paris, France.

Last Wednesday evening, the director herself of the National Gallery, Ms. Marina Lambraki-Plaka, acted as a guide for visitors of the exhibition. There was a fairly good crowd gathered, but not so many as to make the experience uncomfortable. Truth be told, I am not a regular in such venues (the Gallery's hours are mostly meant to cater to tourists and the non-employed after all...), but if an exhibition of this caliber takes place I try to find the time to squeeze it into my schedule. The narration was quite interesting; not too long - not too short, and it helped me short out ideas, art styles, events and personalities that I had heard about without, until now, having put them in the proper context. Aside from that, the paintings sent from Petit Palais were really astounding; each one was... one of a kind. Even if you were no art expert you couldn't help being captivated.
The Petit Palais Museum as we learnt, was built for the World Expo

, and Greece was one of the countries invited at the time. So, as you enter the hall, on the left hand side, the National Gallery has set up a "secondary" exhibit, with paintings of the Greek painters who had taken part in the 1900 World Expo! Some of them had received awards, like the Children's Concert, by Georgios Iakovidis or On the Terrace (Athenian Evening) by Iakovos Rizos, pictured on the entrance ticket below. 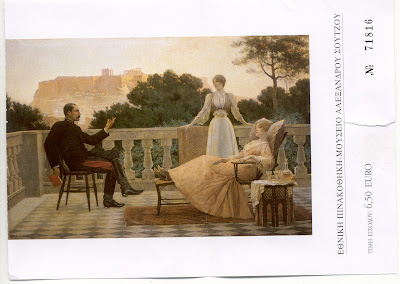 I also very much appreciated the quality of the information panels placed at strategic points in the halls. Usually they are filled with jargon, pointless technical details or, on the other extreme, lacking in info. These ones were a pleasure to read, with properly-sized fonts, and just as much information as was needed to accompany you or to stir your curiosity.

Trivia: Another interesting piece of info I picked up was that the Greek Pavillion for the 1900 World Expo had the form of a Byzantine church, although on the inside it was actually made of modern materials, such as cast iron. Well, this pavillion was relocated to Athens after the Expo, and it is now sitting on a major Athens thoroughfare, operating as an actual church! It is the "Aghios Sostis" (Christ the Saviour) Church, at 129-131, Syggrou Ave. Throngs of people walk or drive by it every day but I doubt even a few know its story...