Pavlidis Chocolate is a household name in Greece. The kind of superbrand that persists through all kinds of adversities and ups and downs that time inevitably brings, remaining at the top of consumers' preferences. It's been around for more than 150 years!
Up until 20 years ago -give or take- you could find very few imported chocolate bars in Greece. The local market was shared among a few Greek brands and Pavlidis was the one that stood out among them, especially with its 43%+ dark chocolate offering. The so-called "Sokolata Ygeias Pavlidou" ("Pavlildis' Health Chocolate") is deeply engrained in our collective, choco-loving consciousness, especially for those of us older than 30 years old. I don't know who came up with the slogan "Health's Chocolate" (written on the bar's blue-colored wrapping, featuring the multitude of medals and prizes that the company's products have earned in time) but for many Greeks, even today, the term is synonymous with the phrase "dark chocolate". 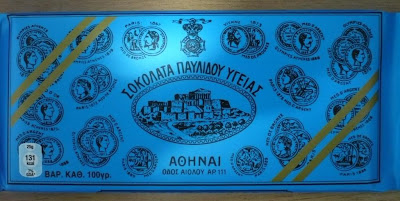 And yes, come to think of it, a blue colored wrapping in any other chocolate bar would probably deter me from trying it out. But in this case, the memories that the wrapping brings have the exact opposite effect.
Now, 43% cocoa may not sound like too high a percentage these days, but back in the 1980's the only other alternative were overly sweet milk chocolates with a very low percentage of cocoa. During "Good Friday", when we had to go through the... mandatory Christian Orthodox fasting, a "sokolata ygeias" was a rare treat inside a week of bland, tasteless food (at least for our childish taste buds). We were allowed to eat dark chocolate ("sokolata ygeias") because it didn't contain milk (which is a no-no for Christian Orthodox fasting) and that only added to the chocolate's allure!
The company was bought by Kraft Foods in the 1990's and can still be found all over Greece. Whenever I travel abroad I try to make a small trip in a local super-market. I think it's a great way to mingle with locals and get a feeling of everyday life, let alone sample some of the local treats (chocolates included!). So, I highly suggest you give this one a try.
The reason for this long narration is that Pavlidis (i.e. Kraft) set up an ephemeral "Chocolate Museum" beside their factory at 135, Pireost St. in Athens this weekend (29-30 January 2011), offering special gift packages. We tried to visit the "chocolate museum" Saturday morning but this is what we came across:
The temperature was near freezing level and the line wasn't moving. So we just took a few pictures and took off (yes, we did buy some chocolates from the supermarket later on!)
P.S. Greek intellectuals, artists, etc. often complain about modern Greeks' obsession with food (and TV sports viewing) and about how that is their only interest. In contrast, modern Greeks relation with art and books is almost non-existent they say. The picture below is of the queue at the Benaki Museum, across the street, at 138, Pireost St. :)