Last Sunday afternoon, while it was still hot and sunny, we decided it was about time to go see the ...famous Akadimia Platonos park. This is an urban park, in the fringes of Athens, which was created fairly recently, about 10 years ago give or take. It is located in a poor neighborhood, 1-2 miles NW of the city center, very close to the Kifissos inter-city bus station and full of old, small industries that were abundant in neighborhoods like this till 1985, when a planning decree of the time forbid the expansion or extension of existing industries and gave motives for their relocation to areas away from Athens and / or Attica (Attica is the wider region of Metro Athens and the rural area around it).
What was left since then are the smallest of the small; family-size businesses that probably never had the aspiration or the possibility to grow and move far away from their owner's home. As urban renewal, in its modern-Greek form has touched other areas of the city, this one has been mostly left to ...evolve naturally, if at all. With industries gradually becoming smaller, older and rarer this is starting to have less of an industrial character and looks mostly like a lower working-class, mixed-use neighborhood.
The area and the park derives its name from ancient ruins that were discovered here, in a 1957-63 excavation, believed to belong to Akademos, one of the first settlers of ancient Athens. Ancient philosopher Plato used this area as grounds for his philosophical school, which he established in about 387 BC and taught there for about 40 years. This is how the word "Academy" was first coined and where the term academic comes from. Plato's Academy (i.e. philosophical school) remained in operation, in different forms and phases till AD 529 when it was shut down. Its last teachers found refuge in the Persian empire but were later permitted to return to Athens.

The modern day park, bearing the name Akadimia Platonos, just like a square in the same neighborhood, is quasi-urban, quasi-archaeological and is expected by some to be a catalyst for the rejuvenation and turnaround of this neighborhood, although things seem to have stagnated and the lack of funds will probably not help. The excavations had been there since the 1960's but the park has taken its current form in the past 10-20 years. The final borders and landscaping of the park are still a matter of debate and works were under way at some of the edges when we walked here. It is currently sliced by two roads (Kratylou and Monastiriou Streets) and it could have been better kept.
It's not an impressive sight for its natural beauty or landscaping (rather the opposite, with the help of Greek local authorities "branding" efforts - see picture below) 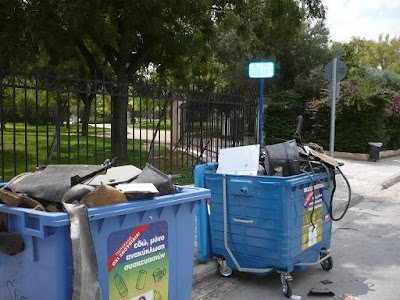 Greek branding at its best. Proper welcoming, at the Akadimia Platonos main entrance...

...but the mere historical significance of the place outweighs any management shortcomings. You will have bragging rights that you walked where Plato used to walk and teach his students! 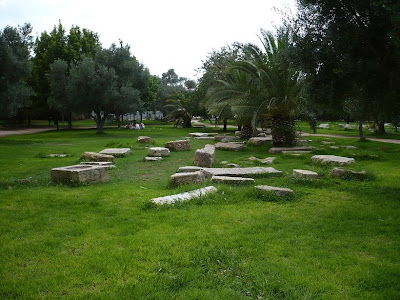 People sitting at the grass. Ancient ruins scattered on the lawn.


We saw a few people jogging or, mostly, laying on the grass this hot Sunday afternoon. We saw signs of nightly drug use (syringes) in some lower-level, shady, bushy parts... 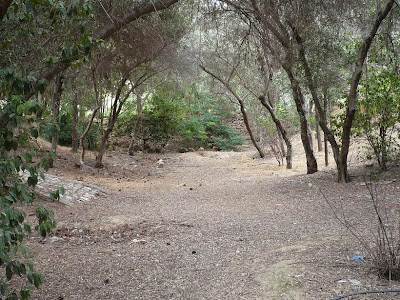 ...but we didn't notice any alarming activity at this time of the day. Entrance is free and there are many entrances from surrounding streets.

The most important archeological ruins are in the northern, smaller, wedge-shaped lot, formed by Monastiriou and Kratylou/Drakontos streets. There, you'll see the ruins of Akademos' house and a "sacred house", under a large, metal roofing. 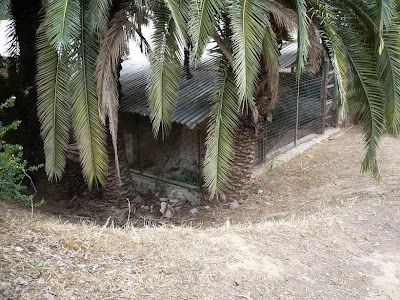 There are no explanatory signs in the grounds whatsoever, except for a small, almost hidden, metallic sign under the metal roofing covering Akademos' house. I've managed to stitch together a picture of this sign (see below).

The park is mostly flat but you have to walk or "run down" a rather steep plane at several points, if you want to take a better look at the ancient ruins, since most of them used to be buried underground and thus lay at a lower level than the current plane (about 3 meters - 10 feet, see picture above).
If you are interested in reading further about Plato and his Academy you can click the Amazon link here

(we get a commission for any sale made through Amazon to help with the maintenance of this site).

Another interesting sight, since you'll be in the area, is the church of Aghios Tryfonas at the corner of Alexandreias and Marathonomachon Streets (southernmost section of the park). I don't have a story about it. It was just freshly painted, well-preserved and interesting looking architecturally (and totally kitschy at the same time!), with some modern... extensions creeping out of its windows. 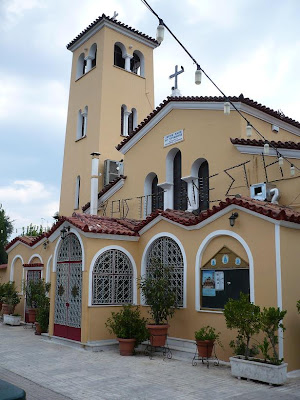 Right next to the urban bus stop (Bus 051) cutting through the park we saw a fenced lot, occupied by archaeologists, and full of archaeological ruins from the sight. These looked at least just as interesting as the ones in the grounds.
Depending on your level of interest (or ease of boredom...) you shouldn't need more than 1 hour to walk around the park and take a look at the area. Here's a suggestion for the hasty visitor (or young, power visitor) carrying only 1 back-pack (or for a group of visitors who can leave someone standing and look after the others' luggage):
If you are leaving Athens and are on your way to the Kifissos (inter-city) Bus Station you can take urban Bus 051 from 24 Zenonos St. (city center-seedy area) and get off at the Kratylou bus stop (3 stops before the end) at Akadimia Platonos. 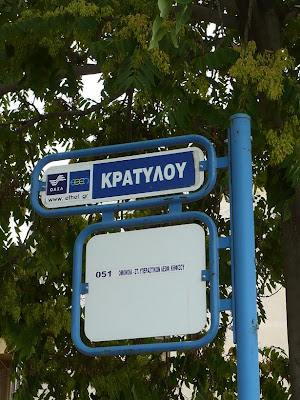 Staying on your right hand side (in the bus's direction) you walk 50 meters on Kratylou St. and get into the park through the entrance on your right-hand side. The metal roofing with Akademos' house is hidden behind the trees on your right. You take a look at it and at some other scatterd ruins laying around for 10 minutes and then you go back to the bus-stop and take the next bus (with the same ticket) for the Kifissos Bus Station. Urban buses (051) run about every 10 minutes so you shouldn't have a problem. Allow some time though, in case one of the buses is full and cannot carry everyone and their luggage... In the extreme case, you may have to walk along Kratylou / Drakontos St. and reach the Kifissos Bus Station on foot (1200 meters, 3/4 of a mile). 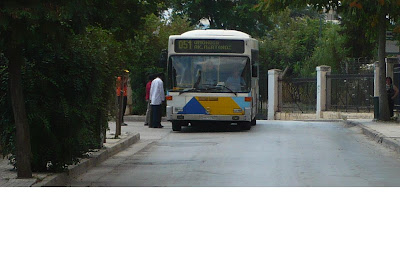 If you have time (and are not carrying luggage) you can also visit another sight which is fairly nearby just like we did. You walk along Tripoleos Street to the north, through a typically dense, urban neighborhood, heading to the nearby Hill of Ippeion Colonou or Hippeios Colonus or simply Kolonos Hill (Lofos Kolonou).  According to ancient writings, Plato was buried somewhere between the Academy and Kolonos Hill.
The hill is most famous for ancient playwright Sophocles' play "Oedipus at Colonus

", the middle play in a famous trilogy

. Nowadays, there is an open-air, stone-made, modern amphitheatre which is mostly used for amateur, neighborhood-type productions (concerts or plays) or some... similar level professional ones (that's nasty! I should rather say... low-key, non-glam productions...). The space beneath the theater seemed to house a local scouting club. There is lush vegetation (pine trees, etc.) but as you walk up the top of the hill, which is flat, stone-paved and open, you get some very interesting views towards the hills of Lykavittos and Tourkovounia. 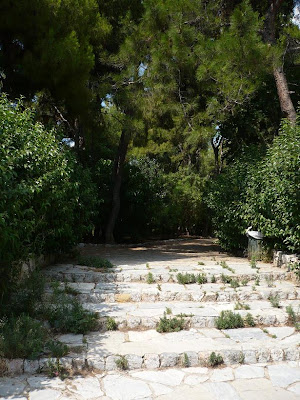 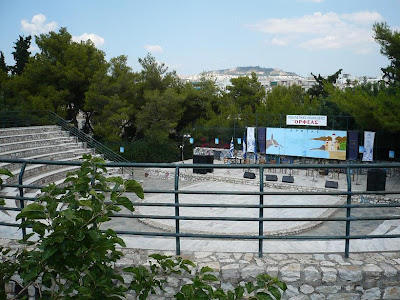 Amphiteatre, with view towards the Tourkovounia hills 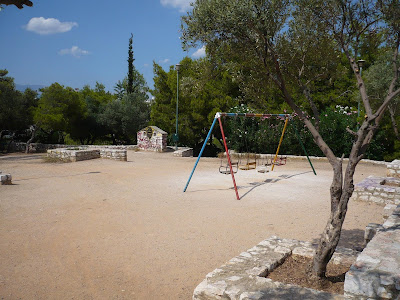 Playground, at the top of Kolonos hill

There is a playground for younger children and what mostly stands out are the two fenced sculptures in honor of French archeologist Charles Lenormant and German scholar Karl Otfried Müller. Lenormant died during a visit to Athens in 1859, while accompanied by his son François who was also an archeologist, and his heart was buried here at the request of the Athens City Council. I've read that it was placed inside the marble, hydria (water jug)-shaped sculpture. Since 19th and 20th century Athenians showed so much respect to the sculpture that they used it as shooting target, thus destroying it, I don't know what happened to Lenormant's heart... The sculpture itself was replaced with a copy of the original in 1936 but there is still an iron fence around it for protection. Sad to see that some traditions are still kept is this country... 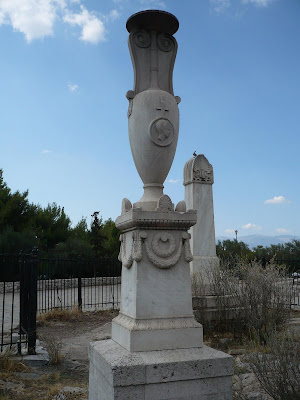 Sculptures on top of Kolonos Hill, in honor of Lenormant and Müller

As for the other of the two deceased, Müller, I find it quite ironic that he was buried here, since he became most famous for his love for Sparta... At least, he got to visit Sparta and other places in Peloponissos before his death. It might be comforting to him that, at least, ancient Colonus was not inside the borders of the ancient city of Athens! Lenormant has given his name to a main thoroughfare, connecting this neighborhood with the town center, near Karaiskaki Square and the Metaxourgeio Metro Station. The closest Metro Station to get back to is the one at Stathmos Larissis / Larissa Station (Red Line 2).


Update: 2013-02-10: I recently went back to Plato's Academy: Click to read about an art exhibit that took place there and see some dusk photos.