Walking around the Acropolis on Independence Day

Nice, sunny day yesterday and a walk around the hill of Acropolis seemed like a good idea, as it was Greek Independence Day (25 March 1821) and therefore a day off for most people.
We got off the Metro (Line 1) at Monastiraki Station, 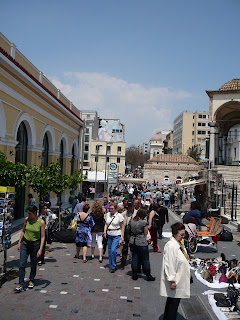 ...which is beneath the Acropolis hill. Outside, a band was playing and there were throngs of people hanging around. The band looked like a municipal band, from their clothes, and therefore played a generic, 'festive' kind of music for the generic audience that would be present...
We walked on through the narrow streets of the Plaka neighborhood to the Roman Agora 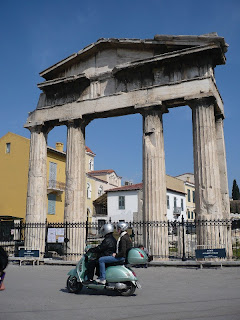 ... (which is not to be confused with the nearby Agora) and then moved further up the hill. It was around 3:00pm (lunch time for most Greeks) so, past the tavernas and the cafés which were packed with people, you could hardly see anyone walking and that made our walk much more enjoyable. 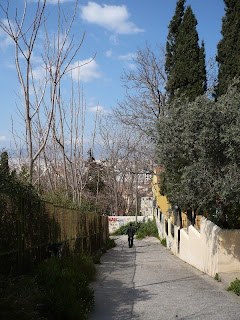 The view towards Athens was as clear as the sky (that's always the case I guess!) and below is a picture of the Temple of Hephaestus (often referred to as Thission), located inside the Agora (Ancient Market). In the background is the concrete jungle of the modern Athens metro area and the Egaleo mountains (in the west) 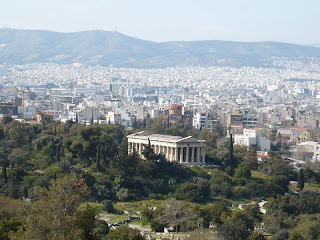 Walking through the Thission Park... 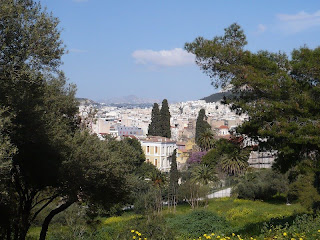 ...we ended up at the Thission neighborhood and the "long walk" (promenade, named Apostolou Pavlou at this spot and Dionysiou Areopagitou further on).
Important Parenthesis: At this point I should make note of the special elevator, installed in 2004, allowing people on wheelchairs to access the Acropolis. It is found on the north side (overlooking the Thission area) but the way to get to it is through the main entrance of the Acropolis, at the turn where the Apostolou Pavlou promenade becomes Dionysiou Areopagitou promenade (and vice-versa). Here is the elevator viewed from below: 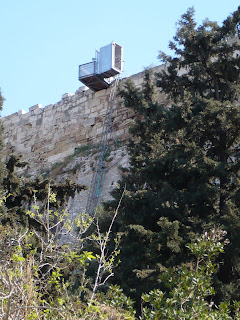 As usual there were hundreds of people sitting at cafes at the Thission neighborhood and street artists doing their thing. This man, acting like a modern-day Atlas really seemed to have caught people's attention. 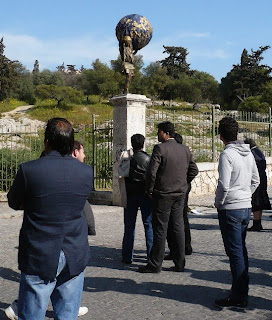 Pretty soon it was lunch-time for us late sleepers, so we headed back home, this time catching the Metro from the Thission Metro Station. About 1.5hour of walking and quite enjoyable.
Morale of the day: Avoid having lunch at the same time as Greeks and use that time to do something else instead!
You should follow me on twitter
at Friday, March 26, 2010