Impressions from the Benaki Museum

The Benaki Museum is one of the most central and historic museums in Athens; the first private foundation of its kind, whose operation started in 1930 in what is its current "central building", on Vasilissis Sofias Avenue. Every time I think of the central building, the words of a knowledgeable English acquaintance come to mind: "It's nice but it's a private collection; not a Museum!". I can't be the judge of this aphorism but what I can tell you for sure is that it has managed to garner the respect of most art lovers and private collectors in Greece, who often choose to make donations to the museum, thus expanding its reach. Recently it has embarked on a networking mission, with famous museums around the world. There are currently 8 different buildings, in various Athens locations, housing different types of collections. This post is from a recent visit in the central building (1 Koumpari St. & Vasilissis Sofias Ave.), which houses a collection of artifacts covering the whole range of Greek history, from pre-historic times to modern day Greece. The accompanying legends under each showcase are in Greek and English.

The first 8 rooms of the ground floor quickly cover the period from prehistory to late Roman times. This is the period that is covered by other museums (National Archaeological, Acropolis and Goulandris Museum of Cycladic Art) in immensely greater detail. Rooms 9-12 cover the Byzantine Empire and early post-Byzantine times, with some wonderful religious paintings of the Cretan School (whose most well-known child is Domenicos Theotokopoulos, a.k.a. El Greco).

The 1st floor deals with late post-Byzantine times as well as the "period of foreign domination" (~14th-18th century) which, for most of the Greek areas, meant Ottoman rule. This is where the Museum truly begins to shine, housing an impressive collection of folk art from Greeks of all walks of life and geographical latitudes.


The, smaller, 2nd floor presents paintings and collectibles from the period just before the Greek war of independence (1821), with special focus on the nautical tradition of Greece. It also houses a temporary exhibition space and a very nice roof garden cafeteria / restaurant with views towards the National Garden right across the street.

The temporary exhibition currently on display (till 31 August 2014) is "Tobacco: 101 notes on oriental tobacco" and presents the story of the tobacco cultivation and trade in Greece in the last two centuries with various interesting posters and exhibits, even for an avid non-smoker like myself. Many a Greek poems have been written on cigarette packs, and the ones below belonged to famous poet Yiannis Ritsos.

Finally, the 3rd floor houses artifacts and paintings from the Greek Revolution of 1821 and the formation of the modern Greek state. I was mostly impressed with the paintings collection. The paintings found here are the originals of images presented in every Greek history school book, engrained in the collective minds of Greeks of all ages, depicting the heroes of the Greek revolution and the first statesmen of the modern Greek State.

Last but not least, you may search the archives of the Benaki Museum -paintings included- through this handy search page, even after your visit. For opening hours and more practical info check out my "Athens Museums" page. 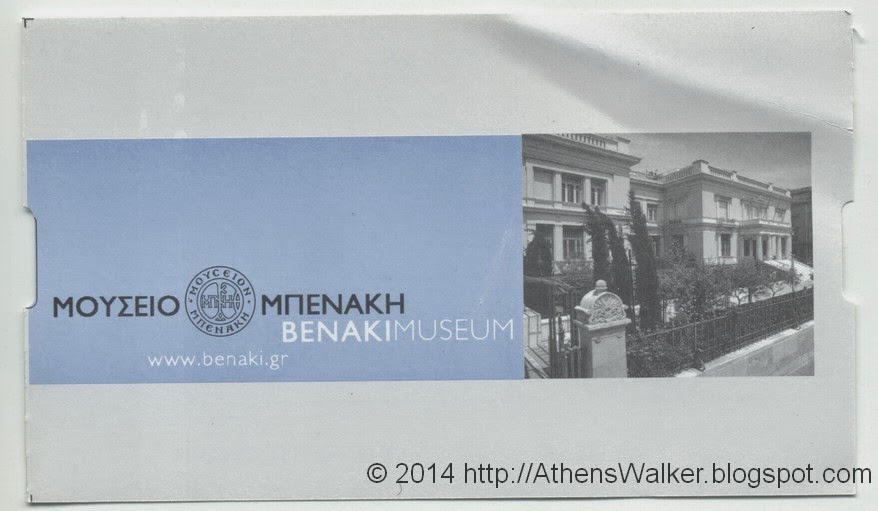