Pictures and dates of Athens

Athens is a hidden city. It really is! Besides all the monuments, ancient history, loaded politics and endless newsbytes I often think that this is a city hidden from its visitors, or even us locals. (Does it give me the right to call myself a "local" as I haven't been born here?)

Places, sites (besides the famous ones) and attitudes are often hard to discover and discern here, besides the seemingly open character of Greeks and the sunlight the whole country is bathed in. It's like this is a city of a million little secrets, that nobody will ever find the time to unwrap. I am often reminded of this on this day.

October 28 is a national holiday here in Greece; one of the three official ones. It marks the entry of Greece into WWII, on 28 October 1940, when Italy under its then fascist leader Mussolini, invaded Greece [it was a brief victory for Greece, but still one worth celebrating as Greeks were fighting a much larger army]. The peculiar connection with this blog comes through an email I received some 2 years ago. An Italian reader was intrigued by my writing on Patission Street and decided to share his story with me. Somehow I have misplaced the emails we exchanged but this is what I remember in brief:

My reader had spent part of his life (his first years) in Athens, in a small house on Patission St., which was demolished at about the time he sent me the email. The only connection of the house to the street was through a small, incospicuous door which, through a narrow corridor led to a nice, internal yard, tacked in the center of a block with various houses using it as a common area. This yard had an active social life, still hidden behind the building facades  and away from the street. My reader's father had been kept at the army headquarters at Goudi during WWII. He didn't say so, but I inferred he was a war prisoner. I thought it improper to ask as it might have been a delicate subject for my interlocutor.

Afterwards, the Italian prisoner was released and he met his future wife here in Athens; they married and stayed here for several years - perhaps until the 1960's or '70s. And my reader -their son- had lived for several years in that small, enclosed house and yard in a central Athens street. No sign of the house, the yard or its inhabitants for the casual passer-by of the street. You might say this is typical of every big city. People living "in isolation" from their wider neighborhood and yet strongly connected to their small circle; strangers among strangers, networks of people interracting and helping each other (when "social network" was a word only sociologists might use) each one with their own particular story, slices of life carved out from the big city. However, I see this as a metaphor for Athens especially, as it is a city different than any other in Europe (for better or worse) that will not reveal its secrets easily to the casual tourist or sight-seer who comes here just for a couple of nights before heading out to the islands. 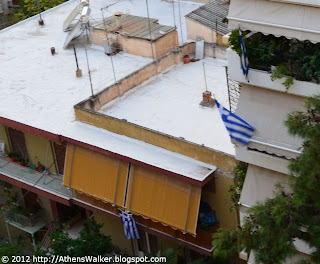 Email ThisBlogThis!Share to TwitterShare to FacebookShare to Pinterest
Labels: other - various - life in Athens, views and opinions