This is the second, upper, part of my walk along Alexandras Avenue [click here for last week's post (part 1)] which probably has to do with sports and politics more than any other street in town. But before that, the first thing you notice is one more hotel, the second of two along this main Athens avenue. It is Zafolia Hotel, a 4-star city hotel located at numbers 87-89, on your left hand side as you ascend. 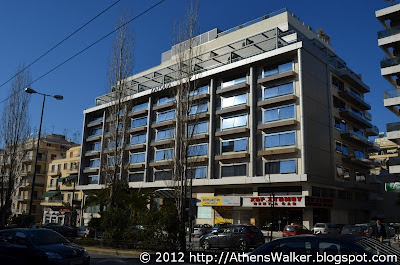 There's not much to see around here. Mostly some interesting views and perspectives into the back streets of the residential neighborhoods of Neapoli (to your right) and Gyzi (to your left). You may also start your ascent to Lykavittos Hill if you venture to the right from here, if you want to walk up the hill.
If you stay the course and walk up Alexandras you will notice a green-white painted  two-storey house to your left. The building houses a fan club of Panathinaikos Sports Club and was painted in the colours of the team about 2 years ago.


A few blocks on, you will notice some large buildings to the left and right. The one to the right is pretty clear...
It's the old soccer stadium of Panathinaikos F.C., the most successful team in Athens and one of the two top teams in Greece, in terms of both fans and trophies. In fact, the stadium is nick-named after the street as  Leoforos Alexandras or simply Leoforos. It was built in 1922-24 and was the first soccer field in Greece to have stands (wooden ones) -built in 1928, at the side of Alexandras Ave.-, the first one to have concrete stands -in 1931-, the first one to have floodlights - in 1948- and the first one to have grass - in 1958. (Source: The Club's official site , in Greek- click to see some old pictures). There was also an indoor gym -the first one in Greece- constructed under gates 6 and 7 to house the club's other sports (basketball, volleyball) in 1958 to 1961. Due to its narrowness, the gym immediately got the nickname "The Indian Tomb", after Fritz Lang's movie which was playing in Athens cinemas those days and it stuck ever since.


The club's fans have many good memories from this stadium, the main one being the 3-0 victory against  Red Star Belgrade on 28 April 1971 and subsequent advance to the European Cup Final

(and some not so good ones...) and some of them are depicted in the boards surrounding the structure. It is set to be demolished and replaced by a park, as part of a land-swap and urban regeneration scheme. Panathinaikos is currently hosted at the "Athens Olympic Stadium" in the northern suburb of Maroussi but when the whole scheme goes through the club will move to a new stadium in the western neighborhood of Votanikos.

Moving to the left side of Alexandras, just before you reach the stadium, lies a big glass and marble structure which is Greece's Supreme Court for Civil and Penal Law, the so-called Areios Pagos. The court was erected in 1981 in the place of the former "Averoff Jailhouse", a jailhouse erected for underage delinquents in 1894 but which was also used as a place of torture against Greek rebels during the WWII occupation of Greece by the Nazis.
Right after it, at 165-169 Alexandras, is a complex of 8 derelict but architecturally interesting buildings that have their own unique history. I'll make a detour from Alexandras to the left here, at Kouzi St.: these are the so called Prosfygika' (Refugees') buildings. They were erected in 1933-1935 by 2 Greek architects (Laskari & Kyriakou), in a Modernist / Bauhaus architectural rhythm, in the aftermath of the Asia Minor Catastrophe of 1922, when 1.5million Greeks were forced to leave their homes in Asia Minor and came to mainland Greece as refugees. They were scattered all over Greece, including Attica, and a small state program of housing tried to accommodate a number of them with constructions such as this one.


There are 228 apartments in 8, strictly rectangular, parallel, blocks with trees lining the quiet streets that join them. Even more, during the Greek civil war (at the aftermath of WWII) there were battles held here between the two fighting camps: the national army (with the support of the British) and the communist-led rebels of the "democratic army" (who did not get the Soviet support they were longing for). You can still see bullet holes and shell marks on some of the buildings if you look at them carefully.
As is often the case, there was a controversy as to what to do with these buildings in the past 20 years, when  most of the old refugees and their children had either moved out of here or passed away. The State wanted to raze them completely (initially) or keep just two out of the eight blocks (later) but the Courts decided that the whole complex should be classified as a historical, architectural monument. So, the State has been pondering (or not...) what to do with them for the last 4 years or so, since they were declared worthy of preservation.


There are two related marble plaques erected nearby: One of them seems to have been installed by the Communist Party of Greece and has a civil-war / divisionist character:

The other is placed one block before that, at the front lawn of the Areios Pagos, by a "united national resistance movement" and the then mayor of Athens (who was a PR expert... :) ) and has an inclusive character,  refering to the events of WWII. Aesthetically, you won't find much difference between the two...
Getting back to Alexandras Avenue you'll see some more large buildings which are a cancer patients hospital and the Police headquarters (to your left) and a large building belonging to Piraeus Bank (to your right).
You will also see the Ambelokipi Metro Station here, part of Line 3 that takes you from the airport to downtown Athens and then to the western suburb of Egaleo. The next 3 blocks, after the intersection with  Soutsou / Parnormou St., are mostly lined with cafes and eateries of various types, mainly serving the local office population that works here during the weekdays. The one that strikes you the most from the outside is the  blue-colored building on the left hand-side, formerly of Craft Microbrewery; the first Greek microbrewery to open in Athens, 15 years ago. This location shut down in the summer 2012, during the first peak of the financial crisis. The brewery has now (2015) gone out of business.


Reaching the end of the road, at the corner of Alexandas & Kifissias Ave., lies the so-called "Thon Building", an office building with a Starbucks and TGI's at the ground floor, the Australian Embassy at the 6th floor and an interesting little chapel right next to it, that seems to be waiting for some kind of restoration work to take place.

If you are tired from all the walking I'll give you some food suggestions in the surrounding area of Ambelokipi and a few more tips in the coming posts.