Fear of the flying yogurt!

Greek officials are almost in a state of panic in light of the parades to take place tomorrow and on Sunday, to celebrate the anniversary of Greek independence (25 March 1821). This time it's not the Ottomans but the "brigades" of the yogurt-throwers.

Recent celebrations in the past couple of years have seen a rise in ...unorthodox types of protest, including some indeed thuggish ones by groups of "enraged citizens" who have given up hope of turning the country around by means of persuasion and are resorting to violence or quasi-violence to express their disgust against public officials and politicians. Such groups have disrupted parades and other types of events or ceremonies, demanding that public officials get down from the stage so that the ceremonies can continue. Occasionally, they have also resorted to throwing cups of yogurt against their... "targets" (which is probably not related to  the alternative spelling of yog-hurt). The Greek police being inert and all, yogurt throwers have been allowed to have their share of dairy success, so there is now a fear of yogurt-throwing contagion.

Authorities have been guarding the main stage set at Syntagma Square, outside the parliament all day Friday, since there's a student parade tomorrow and a military parade on Sunday and thousands of police will be on duty. Municipal authorities also collected all the low-hanging fruit from tangerine trees planted in some streets and squares, for fear that they also will be used as weapons against politicians! Which would create an awkward, gourmet type of aggression, as in "fruit with yogurt"...

Political considerations notwithstanding, I wonder if Greek yogurt makers have any plans to use this ...trend as a marketing means for their products, here or abroad. For the moment, I'll leave you with a picture of a  Greek yogurt cup found in my home, strictly for personal consumption! 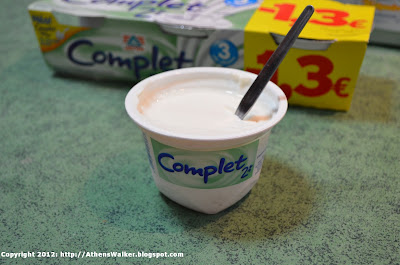 P.S. According to http://www.fearofstuff.com/phobialist/ the fear of yogurt is called Giaourtiophobia. The fear of flying is called aviophobia, but that's another thing I guess :)

Email ThisBlogThis!Share to TwitterShare to FacebookShare to Pinterest
Labels: events, other - various - life in Athens