There were ugly riots and torchings of buildings last night in Athens, obviously an orchestrated attempt by hooligans with political hallucinations. Part of the Attikon Cinemax movie theater was destroyed, along with several other buildings. As the main hall of the movie theater was saved from the fire, it is possible that the cinema, one of the most beautiful in Athens, will re-open sometime soon. 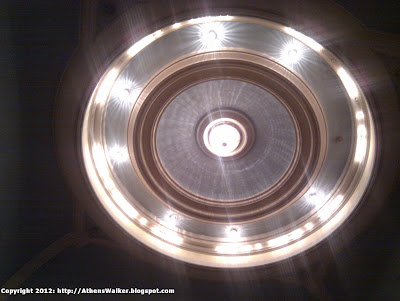 The picture above is from the light installation atop the main projection hall and it was taken, with a cell-phone, just a few months ago.


Update 2013-03: The movie theater has not yet been restored; probably too costly. This is what the burnt building still looks like from the outside:

Email ThisBlogThis!Share to TwitterShare to FacebookShare to Pinterest
Labels: events