I have written before about a new urban movement of Athens residents called "Atenistas". These are people who -disappointed with the city's gradual but steady decline over the years (with the noted exception of the 2004 Olympics

)- are trying to take things into their own hands and set an example for the rest. They identify problem spots (an abandoned lot full of garbage, a dirty park, a flower-bed that has been left to dry, a beach with garbage) and take concrete, hands-on, D-I-Y action to try to turn things around.

I had the chance of taking part in such an event today, cleaning building walls and columns, covering 4-5 city blocks of Patission St., one of the main thoroughfares of Athens, for about 4 hours. A large number of Greeks show no respect for public space -although they'd go ballistic if you touched their own private property-  and walls are full of advertising stickers, political or advertising posters, "for rent" and "to sale" labels, "tags", graffiti, etc. Cars and motorbikes are often parked on sidewalks. The fact that city authorities have failed to deal effectively with this has only exacerbated the problem in recent years. 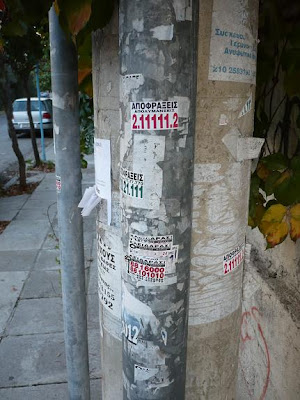 So, fully aware that this was just a minuscule action compared to the massive amounts of dirt that surround us, we scrubbed,  sprayed, pulled off stickers and washed and scrubbed again, until a good number of walls and columns was reasonably cleaned; not anything spectacular but enough to realize that something had... happened. 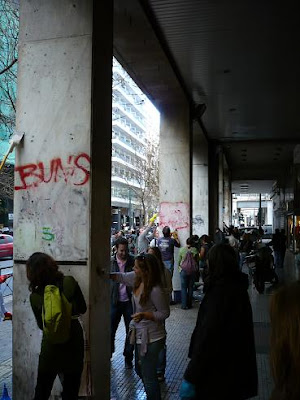 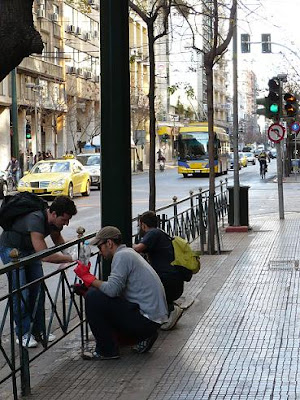 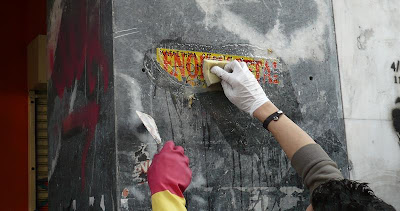 We had all kinds of reactions, typical of the different attitudes you may find around. Some people were simply curious and inquisitive as to who we were and "who had organized this". Some with a positive, even impressed tone; others  with a sarcastic, dismissive one. Some were plain indifferent. We even came across a couple who were shocked that we had the nerve to scrub a slogan with the "A"(narchy) sign; I guess these two were coming from the next Harry Potter film: Harry Potter and the Magical "A"...  We even came across an old, public, analogue clock -outside the central post office at Aiolou St.- that probably very few people had noticed till then, and tried to clean that one too. 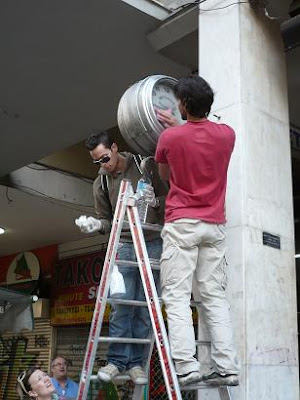 All in all, this was an interesting way to spend an early Sunday afternoon and do something for the city at the same time.